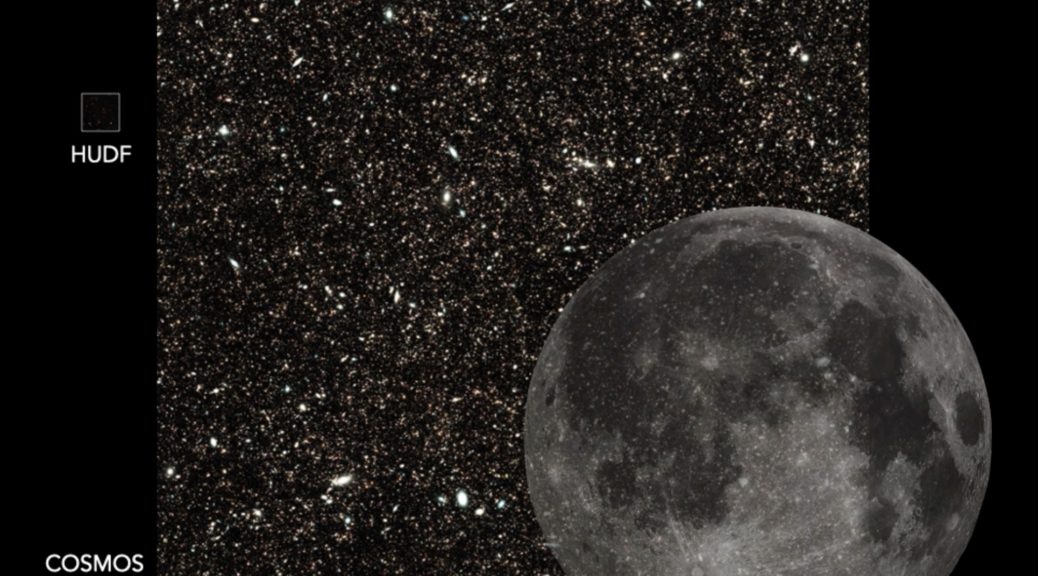 With the imminent launch of JWST — we hope! — I am resurfacing an article I wrote earlier this year which appeared in a different form on the IAP front page. Next year I will be giving a public conference about this which will be streamed live.

Astronomers learned to read the patterns of stars in the starry night skies as clues to the shape of our own Milky Way. Powerful telescopes soon showed that galaxies themselves were spread out across the sky in a pattern that holds profound clues to the nature and eventual fate of the Universe itself. This is the history of astronomy: with each new instrument, scientists take a step towards a better understanding of our Universe. Very soon, using the James Webb Space Telescope (JWST), an international team of astronomers — my friends in the COSMOS project — will map out a vast unexplored region of the very distant Universe. A key prediction of current theories of the formation of the Universe is that stars and galaxies form hot ionised bubbles of gas in the early Universe. With JWST we will see for the first time the imprint of these bubbles on the large-scale distribution of the very first stars and galaxies. They will also help us to understand how mysterious dark matter helps galaxies to form at the earliest times.

Over the past three decades, the Hubble Space Telescope has opened up vistas of the distant Universe only dimly glimpsed by ground-based observatories. However, charting out how galaxies are linked together across the sky seemed at first like an impossible task for Hubble. The telescope’s cameras can only see a tiny part of the sky in each exposure. But a team of astronomers ambitiously used Hubble to survey a region of the sky larger than the full moon — now known as the COSMOS field — making it the latest ever contiguous patch of the sky covered by Hubble. Since then, thousands of scientific papers have delved deep into the COSMOS field, drawing a detailed picture of how galaxies, dark matter, gas, and dust interact on large scales and how they have changed over cosmic time. Since those first Hubble observations, COSMOS has been covered by every major telescope and this data has been shared in a remarkably open and productive collaboration between all the world’s astronomers.

The COSMOS catalogues have become an essential reference point for the evolution of galaxies over cosmic time and an invaluable starting point to ask any new questions about the Universe. The papers describing them are among the most highly cited in astronomy. COSMOS catalogues have also played a crucial role in preparing for Esa’s Euclid mission.

Of course, astronomers would always like to see further. Data from COSMOS has hinted at another Universe of very distant, massive galaxies just out of reach of current surveys. The finite speed of light is a wonderful time-machine which means that these most distant objects lie, in fact, at the very beginnings of the Universe. But the expansion of the Universe means their light becomes redder and redder as it speeds towards us. To see so very far back, one needs a not only a telescope with a mirror large enough to collect these lonely photons arriving from the edge of the Universe — but also one sensitive to the infrared light bringing messages from these distant galaxies. An even greater challenge is that every ordinary object also emits infrared photons; these would drown out the faint signal from such distant galaxies. To detect this ancient light, the telescope must be cooled to a few degrees above absolute zero and placed far from terrestrial sources. The ten-billion-dollar James Webb Space Telescope (JWST), with its golden 6.5 meter foldable mirror, due to be launched and sent to one of the coldest places in the solar system, is just such a telescope. It is optimised for the study of these faint distant objects. A single exposure from JWST will see deeper than the decade-long ground-based infrared surveys that we in the COSMOS team have been carrying out.

JWST is a remarkable instrument, perhaps the most sensitive telescope ever constructed. Its cameras can record light from objects infinitely fainter than anything we have ever observed before. But where do you point such a beautiful and sensitive machine if it is looking deep into a country that no-one has ever visited before? The best thing to do, right at the start, is to survey a wide swath of this new territory to guide future scientist-explorers. But once again, such a survey seemed an impossible task with the tiny field-of-view of the JWST cameras. Nevertheless, we proposed a highly ambitious program — now called COSMOS-Web — to cover one third of the COSMOS field with JWST’s infrared and near-infrared cameras. Such a survey would require more than 200 hours of observations, an enormous amount for the highly competitive first year of Webb’s operations. Astronomers around the world requested more than four times the amount of time than were actually available. The results of this competition were announced earlier this year: the COSMOS-Web proposal was accepted, making it the largest survey to be carried out during the first year of JWST’s operations. We call it COSMOS-Web because it will map out the web of large-scale-structure of the Universe at the earliest epochs.

Our program comprises 206 hours with JWST’s NIRCAM instrument and 80 hours taken simultaneously with the longer-wavelength MIRI camera. Together, in COSMOS-Web these instrument will produce a new map of the very distant Universe. All data will be public. The new data will contain tens of thousands of very faint and distant galaxies, signposts for follow-up observations with JWST’s other very sensitive instruments. Astronomers will see, for the first time, the structure and form of galaxies in the early universe. And we will see, we hope, things we do not expect to see. Over the years observations in COSMOS has turned up countless interesting and peculiar objects and I am certain JWST observations will continue this tradition!