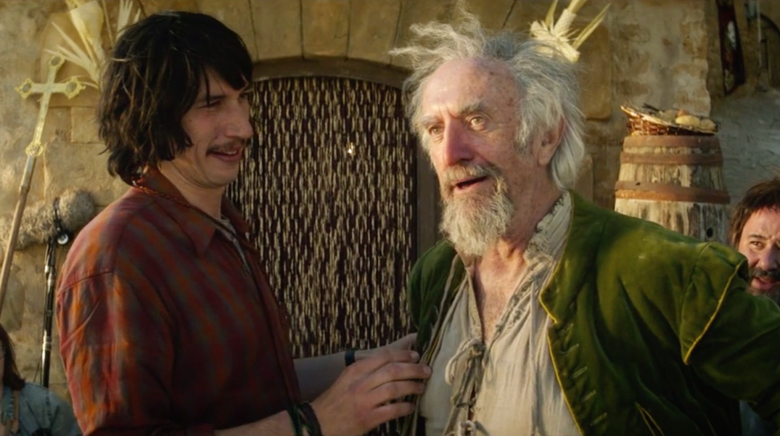 A recent fascinating Freakonomics podcast explained why projects are always late. People tend to promise to do too much for too little money to get the thing accepted in the first place: but afterwards, there is not enough cash to actually complete the project. In general the cost of big projects are underestimated by 30% to 50%, but everyone knows worse examples, the most famous one being The Second Avenue Subway which has been in planning since 1919 but the first stations only opened in 2017.

The movie industry equivalent of the second avenue subway must be Terry Gilliam’s The Man Who Killed Don Quixote which finally opened last week here in Paris after having been in planning since … 1989, almost thirty years ago. The travails of previous attempts to make film in 1998 were most famously chronicled in Lost in La Mancha: Gilliam’s lead actor Jean Rochefort is injured and leaves the set, low-flying jets disrupt the filming, a flash flood washes away their equipment and transforms the landscape. Finally, the filming is aborted. But Gilliam is undaunted. For at least two decades now, he has said that each film he makes is because he cannot make his Quixote.

I can imagine just how difficult it must be to make any film: not only one has to be creative, but at the same time once must manage people and keep production on schedule. And the people you are trying to manage are not exactly compliant. Think of Kinski on the set of Aguirre, who only calmed down after Werner Herzog drew a gun on him. Then there are the money men — the producers — who may not be, shall we say, exactly aligned with the director’s artistic vision. In Wenders’ State of things the tough-guy American producer (played by a menacing Dennis Hopper) is under the impression that his German director is making a gangster movie when in fact it’s a surreal science fiction movie. You can understand why the director would want to keep that a secret from a producer like Hopper.

So, at last, Quixote is on cinemas in Paris, despite having been threatened by a last-minute court injunction by a previous producer. And in fact it’s excellent fun, displaying all the traits of a Gilliam movie: lavish baroque sets, constantly shifting points-of-view, reality and dreams merging and shifting. Adam Driver, whom I last saw writing poetry in Paterson plays a determinedly rational film-maker who finds himself making a vodka commercial featuring … Don Quixote.

We soon discover that a decade previously he made his own Quixote. During a moment on the set he wonders just what happened to the actors who starred in his film, because, actually, the village where they filmed was really quite nearby. Leaving on a motorbike he soon finds them and his Quixote, ably played by Jonathan Pryce. Before long he gets a little too close to the source material, which is about the best way I can think of putting it without giving too much away. Intercut are flashbacks from our commercial-maker’s previous film. For an instant I thought they were out-takes from one of Gilliam’s failed previous productions; yes indeed there are many parallels between these different stories.

Of course it hard to see The Man Who Killed Don Quixote without thinking of the vast efforts that Gilliam took to bring it to the screen. But independent of this, it is still an excellent film, and certainly worth seeing.