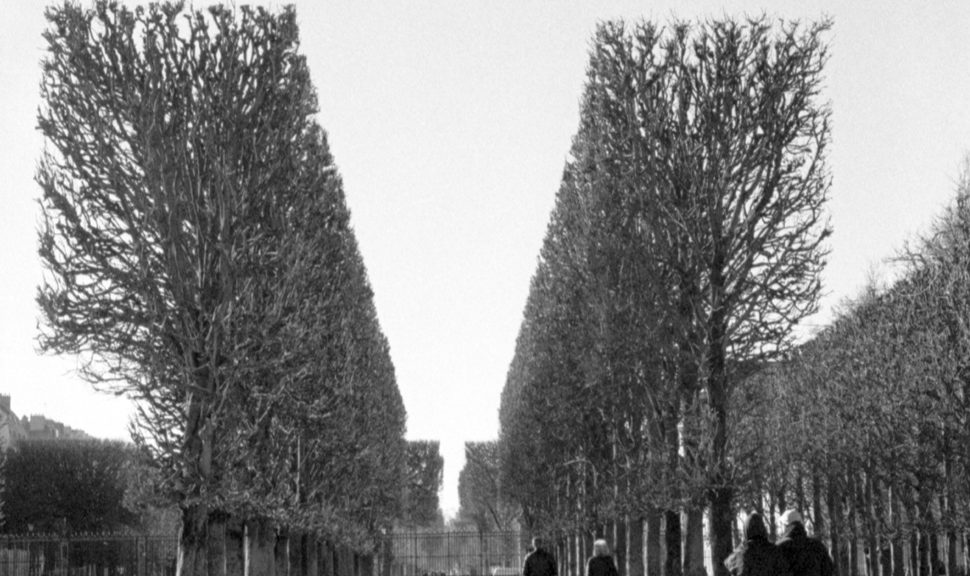 Week 8: It was a beautiful sunny day in winter. Not a single cloud could be seen over Paris. In Luxembourg, the trees and bushes were bare of leaves. At the south end of the park, I saw this:

Taking this, I had a certain photographic reference in my mind’s eye. ..

In Don Delillo’s play “Valparaiso”, an everyman becomes a media star simply because he gets on the wrong flight. Instead of going to Valparaiso, Indiana, he takes a jet for Valparaiso, Chile. The story is told entirely in the form of a series of interviews in which the unfortunate man tries to define himself in terms of his unwanted celebrity. In the end, we never get to find out what Valparaiso, Chile is really like. So it was with interest that I saw a small, cloth-bound book in a bookshop the winter before last with the handwritten words “Valparaiso” on the cover. This, it turns out, was Sergio Larrain’s “Valpariso”.

Larrain was a interesting character: born into a wealthy and privileged family, he decided quickly that he would not follow the path that had been pre-ordained for him. Attracted to a nomadic photographic life, his photographs quickly brought him attention and he became friends with Cartier-Bresson who invited him to join Magnum. At Magnum, he tried photojournalism, and was remarkably successful, managing to get an impossible photograph of a well-known Italian mafia figure by posing a tourist. And then, after only a few short years, he returned to south America, bought a house in a remote hilltop village in Northern Chile, and retreated from the world. He felt that he could not be a professional photographer at Magnum. But there was one place he continued to photograph, and that was the port city of Valparaiso. A small book of those photographs had been published in 1991 and had become legendary amongst photographers and commanded exorbitant prices on the second-hand market.

However, Larrain became increasingly reluctant to publish his work and be interviewed, and it was only after his death in 2012 could one even think about publishing his photographs. He corresponded closely with Agnès Sire at Magnum, and had even sent her an updated version of his book. And so, the Valparaiso that was published in winter of 2016 is an expanded version of that 1991 book, and includes photographs that Larrain took throughout his whole life. You can see a few photographs from the collection Over on Magnum.

I bought this book when it was published a year ago, and I return to it often. The rationalist part of me does not know what to make of Larrain’s talk of the cosmic consciousnesses and his obsession with yoga (he apparently gave yoga lessons during his visits to the Magnum offices in Paris). The photographs, however, have their own logic and charm. I am not sure I am so keen on all those macro shots of flowers and droplets of water, but the message behind them is straightforward and compelling enough. You must observe, you must see things that no-one else sees, and if you do, wonders may possibly be revealed to you. Most photographs are quiet photographs taken with a normal lens and they insist that you look at them carefully. But go just a little deeper, and the understated photographs have more meaning than they seem to at first.

Larrain’s book is not a reportage about life in Valparaiso, although looking at the pictures you do get some sense of what that place might be like. People go up and down stairs, boats arrive and depart. But you see, he is finely attuned to the strange things that can happen in any place if you look hard enough. At the start of his career he realised that Valparaiso was a fine place for such things: at the exact moment he was taking a picture of a young girl with a bob haircut, exactly the same girl stepped into the frame. A double. That is what photography seems to be about: to be able to create situations where the unexpected may happen.

It has been observed countless times how surprisingly difficult it is to take photographs worth looking at. Today, this is even more confusing because cameras will make all the decisions for you — with the exception of where to point the camera, which is the most important one. Looking at Larrain’s book I found it could be considered as an interesting reflection on what a good photograph might be, and how one might find them. One could not ask for more from a book of photographs.