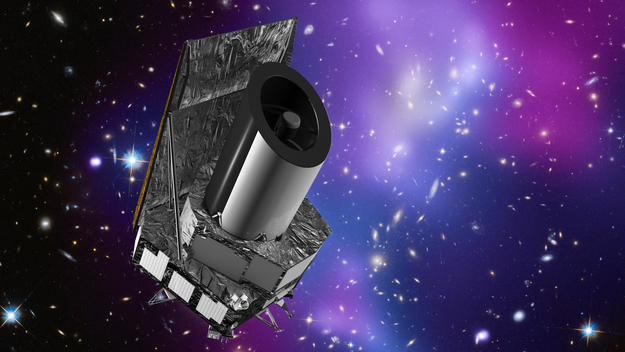 The Euclid space mission (which I have already written about here) plans to stringently test our cosmological model by precisely measuring the shapes and positions of a billion faint galaxies. But you are not going to take pictures of each galaxy individually, obviously, that would be too slow! You need to do a survey, which means with each image you want to take a picture of largest possible area of the sky. So, you need a survey telescope, and because you have a limited budget you need to be able to launch your telescope on the smallest possible rocket. How do you do this? That is what I am going to write about here.

Designing survey telescopes has always been challenging. Photographic plates made possible for the first time measuring the positions and brightnesses of a large number of objects. The field-of-view (the amount of sky you see) for these telescopes was comparatively small. The search soon started in earnest for a telescope which would allow astronomers to even more rapidly the sky. The Schmidt telescope design comprises a spherical mirror paired with an aspherical correcting lens. One of the most famous such telescopes, the 48-inch Palomar Schmidt telescope, covered the entire northern sky using thousands of 14-inch photographic plates and provided an invaluable discovery tool for astronomers.

In the 1970s, the advent of automated plate-scanning machines meant that the first digital surveys of the sky were in fact made with photographic plates by scanning all these plates! Similar southern sky surveys were made by the UK Schmidt telescope in Australia and such surveys were only surpassed by the arrival of true digital sky surveys like the SDSS. The SDSS, incidentally, bypasses the need for extremely wide-field optics by cleverly reading out the camera at exactly the rate of the earth’s rotation, but that’s another story.

However, a significant disadvantage with Schmidt telescopes is that the focal plane — where the image is recorded — is curved, making them impractical for use with flat electronic detectors unless heavy corrective optics are installed (yes, I grudgingly admit that photographic plates are not practical in a space observatory (although amazingly there were once spy satellites which used film).

In addition to this, don’t forget that also that one key requirement for Euclid is not simply to measure the positions, brightnesses and distances of all objects but also their shapes. For faint galaxies seen through ground-based telescopes, object shapes are dominated by atmospheric effects. For exposures longer than a few seconds, object light profiles are smeared out, severely limiting our ability to extract useful information.

For these reasons, Euclid is space: above the atmosphere, the telescope’s shape-measuring capabilities are limited only by the satellite’s optics and detectors. This is also why telescope designs which might have been fine for an instrument lying at the bottom of the murky soup of Earth’s atmosphere are simply not good enough for space. Essentially we need a design which preserves as much as information as possible concerning the intrinsic light profile of objects. And we also need to be able to calculate how much this light profile has been distorted by presence of telescope and detector optics – usually this is done by making observations of perfect point-like sources. In astronomy terms, stellar sources fit this bill very well. But what design is this?

Automated ray-tracing revolutionized telescope design in the second half of the 20th century. Without having to cut glass, computer programs could calculate the optical performances of a telescope even before it was built. In series of papers and described at length in a classic book, the optical engineer Detrich Korsch used these new techniques to perfect a compact, three mirror design which had the great advantage that it features a wide field of view, few optical surfaces, and almost no aberrations over the entire field of view. It’s worth mentioning that knowing the optical performance of Euclid requires an intimate knowledge of optical properties of all surfaces. For this reason, ground testing and qualification of all components are an important part of verifying the Euclid optical design.

But it’s not enough to have an excellent optical design if it is not stable and image quality cannot be maintained during normal operations. So, thermal expansion and contractions must be minimised. Euclid features a silicon carbide baseplate on which all the instruments and telescope are mounted. Silicon Carbide has the unique feature that it expands and contracts very little with changes in ambient temperature, meaning that the path length of the whole telescope can be rigidly controlled. The baseplate is actually created from a mould of particles of silicon carbide which are stuck together under pressure.

What’s the best place to put Euclid? At first, one might think, well, in orbit around the Earth, right? It turns out that a low-Earth orbit is a surprisingly hostile environment. In addition to constant sunrises and sunsets, there are also bands of nasty charged particles, in particular in the region called the South Atlantic anomaly. Hubble Space Telescope observatory is in such an low orbit, and the unfortunate consequence is that there are “blackout” periods which no observations cannot be made. In addition, there a not inconsiderable amount of background light.

There is a much better place to put a space observatory — the second Sun-Earth Lagrangian point, or L2, shown below. Here, a satellite’s location can be maintained with only a minimal expenditure of propellant. At L2, the gravitational pull of the Earth-Sun system almost perfectly balances inertial forces. Moreover, an object maintains an approximately constant distance to the Earth, making it ideal for high-bandwidth satellite communications: Euclid will need to send a lot of data to earth. In this orbit it will also be possible to control rigorously angle the sun’s rays fall on the telescope’s sunshield: this is essential to maintain the optical stability of the telescope. These factors have made L2 one of the best locations in the solar system to place an observatory, and many future telescopes will be placed there. The Planck and Herschel satellites clearly demonstrated all the benefits of this.

With this unique telescope design, capable of taking a high-resolution one-degree image of the sky with each exposure, Euclid’s primary mission will be completed in around six years of observations. No space satellite has ever flown before with such a unique set of instruments and telescope, and Euclid’s images of our Universe will be one of the most lasting legacies of the mission.

This article is one of a series of articles which will be appearing on the official blog of the Euclid Consortium before the end of the year!

One thought on “Surveying the Universe from space”