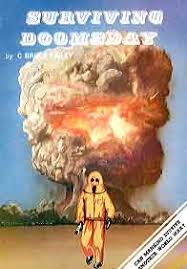 For as long as I can remember I was interested in science. For the first ten years of my life, we lived across the street from the Cookstown public library, and I devoured anything I could find in there about science or astronomy. (I remember later hearing a Carl Sagan story where, as a child, he goes into his public library, asks for a book about the stars…and comes out with a book about Hollywood). There was only one bookshop in our town, and I’m happy to report that it’s still there today, but one day I was in there and saw this interesting book called Surviving doomsday. Interesting for me because there was a drawing of a mushroom cloud on the cover, and that was science, right? In the foreground, a man with a geiger counter in hand and wearing full radiation protection strode confidently away from the cloud. I managed to persuade my parents to buy it for me. I must have been around 8 or 9.

This must have been 1979 or 1980, and we were in the depths of the cold war. I was fascinated by the book. Inside, one could find details concerning how to build a nuclear fallout shelter (but was there enough space in our Cookstown garden, I wondered) together with helpful hints concerning what colour to paint the walls. Of course, at this time there were programs on TV all the time imagining how nuclear war might unfold. I remember standing in our garden talking about one of these shows with my cousin. “Did you hear when they said they hit Lisburn?” I asked him. Lisburn is a suburb of Belfast. Of course it was Lisbon. At the age of 11, my knowledge of world capitals was very sketchy.

I brought the book to school to show it to my friends, I found it so fascinating. Our horrified teacher confiscated it from me. But I think I was too young to be horrified. Perhaps I didn’t fully appreciate yet what was in the world to be unhappy if it was no longer there. Later on, as a teenager, when we moved further out into the countryside, I made an extensive study of post-apocalyptic literature, discovering amongst other classic works George R. Stewarts’ Earth Abides, which describes America after the population is decimated by deadly virus. At the end of Stewarts’ book, a hundred or so years after the catastrophe, the survivors simply lose interest in rebuilding civilisation. What does it mean to them anyway?

And so today we are almost at the end of the second decade of the 21st century. We survived the cold war. A few days ago I learned that those folks at the Bulletin of the Atomic Scientists (remember them?) have advanced their doomsday clock to only two minutes to midnight. Not even enough time to paint the fallout shelter walls the right colour … Let’s just hope that that particular solution to Fermi’s paradox (where are all the aliens) based on the durability of technological civilisations turns out not to be true, after all…

One thought on ““Surviving doomsday””