Today is a Friday, which means that it’s a holiday in Iran; Thursday and Friday are the equivalent of Saturday and Sunday back in Europe. It’s strange how the different religions around the world have chosen different days of the week for their holidays: Muslims on Friday, Jews on Saturday and Christians on Sunday.

In any case, I had decided that today I wouldn’t go to the IPM and I would let the students get on with their projects. They had a fair idea, I hoped, of how to continue with their projects without me. So with my colleague Marc (also here to teach at the school) we took the Tehran metro south to the very last station, the Tomb of Imam Khomeini.

It took almost an hour to ge there. Our train passed above ground, and we travelled through kilometers of long low buildings which spread out from Tehran and into the cities around it. Leaving the metro station, a dry desert heat rolled over us, and with each breath I could sense the moisture evaporating from my throat, not something I could not remember experiencing since I had been in the deserts of New Mexico. It was the end of October: I couldn’t imagine what it would be like to come here at the height of summer. 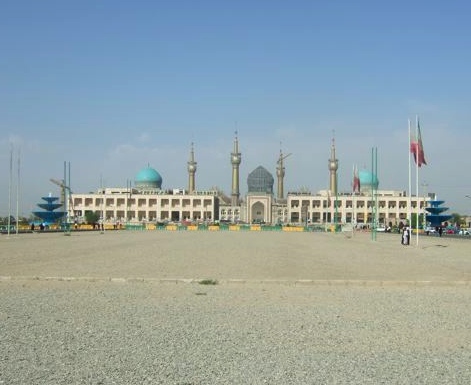 In front of us, under the burning desert sun, stretched a large open square; beyond, were the unfinished dome and minarets of the mausoleum where Khomeini’s tomb lay. Around us, in the distance, we could see a few trees, a road or two, but nothing more: we were really on the edge of the desert. Families, men, children, black-clad women, passed by us returning from the shrine, and under the nearby trees we could see many tents, some with families. The immense open spaces around the made the place feel strangely empty, even though there was a fair amount of people. I realised that for the first time in ten days, thanks to the twenty kilometers separating us from Tehran, I could no long hear the sound of traffic, and I felt oddly relaxed and calm.

We walked a few hundred meters under the arcaded passageways until we reached the entrance to the shrine, taking off our shoes as we went in. Inside, I was surprised how confined it seemed; the walls were covered by blue plastic sheeting and the ceiling reminded me oddly of the Centre Pompidou in Paris, full of exposed pipes and wires. Six green concrete columns surrounded the shrine. To the right and the left were other large unpainted concrete columns. The floors were covered with carpets where many people were praying. In the middle was the shrine itself; a glass box with a white metal grid and a green carpeted roof. The faithful pressed their hands against the metal and muttered a few prayers. To one side, a separate side of the box was reserved for women. I realised that, completely hidden from view, behind the blue plastic sheeting and directly overhead was the unfinished skeleton structure of the shrine’s central dome.

We spent around fifteen or twenty minutes sitting on the carpets before the shrine. “Before the man who had made the west tremble” as my friend remarked. In the shrine, the atmosphere was strangely flat; it was not crowded, and I heard no wailing passionate professions of faith. We left, put our shoes back on and stepped back into the desert sun.

Once outside again, we visited vast the inner courtyards of the shrine which were completely deserted apart from a few workmen. There were certainly no tourists other than us! To the north, listening carefully, we could hear traffic on the motorway rushing towards the airport. Above, a crane made a fifth minaret next to the skeleton of the shrine’s unfinished dome. We had seen all that there was to see, and we returned towards the metro.

Today at the University, when I told the students where we had been, no-one could understand why we had gone there. “You went where“? they all asked us with an air of incredulity. Most of them had only been there on school trips, if they had been at all. Well, you know, I replied, Khomeini was such a important and influential figure in the politics of the 20th century. I was surprised to have tell this to an Iranian! Someone who casts a long shadow over Iran and someone who shaped in a very profound way Iran’s relationship with the west. For us, from the West, Khomeini was for decades someone indelibly associated with Iran. “And do you have tombs like that in the west?” one of them asked me. Well, the only thing I could think of was the tomb of Napoleon at Les Invalides; an enormous marble coffin seemingly half the size of the golden dome of les Invalides. Hubristic. “But that was two hundred years ago”, was the indignant response. And I must agree that “Les Invalides” is nothing beside this enormous structure on the edge of the desert.