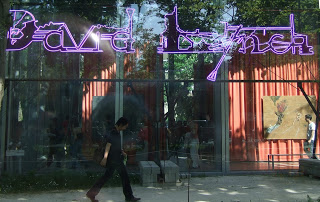 A few weeks ago I went to the Fondation Cartier to see their exhibition of David Lynch’s work, “The Air is on Fire”. (The Fondation Cartier building is a beautiful structure with an enormous glass facade, like perhaps something from one of Calvino’s “Invisible Cities”.) The entire exhibition space has been given over to Mr. Lynch’s works: upstairs there are paintings and drawings; downstairs there are photographs as well as a small cinema designed by Lynch himself. The cinema shows continuously a series of short films from early in Lynch’s career.

However, the thing that one notices instantly after crossing the threshold and entering the building is the “environment sonore”. Loudspeakers have been positioned throughout the building and they carry in perfect fidelity a continuous series of low-pitched rumbles and clanks, humming, blurred whirring noises, sounds of distant underwater factories. It is all vaguely menacing in an undefined, troubling way. When I visited, heavy rain was falling outside, and through the great glass facade of Fondation one could see dark clouds hanging low over Paris, and a grey, watery light filtered through the windows. You get the idea. (I had wanted to go and see the exhibition a second time, before writing this, but these last few weeks the weather has just been too good).

Of course, for the main part the terror of David Lynch’s work comes not from what is shown but what is suggested. The canvases upstairs feature a Lynchian everyman, ‘Bob’ who finds himself in all sorts of troubling circumstances. In one canvas a man (Bob?) faces a woman on a sofa, in his hand is a small, sharp object (could it be a gun?) and from his mouth oozes the words “Do you want to know what I really think?” the response to which from the woman is an abrupt “No”.

Downstairs, all around the walls, is a long series of undated photographs containing the usual Lynchian preoccupations, amongst them photographs of factories and empty stretches of terrain vague. I watched a few of the films projected in the cinema: I saw “The Grandmother” a very early colour feature, which features a small boy who grows a tree in his bedroom, from which emerges an elderly lady — the grandmother of the title I suppose, although we are never certain, the film is silent.

All of this leads one to appreciate even more his latest film, Inland Empire, which I saw just after I had visited the Fondation Cartier. I was a bit apprehensive, of course, given what some have said, but after hearing Lynch talking about the film in an interview, it certainly seemed like an interesting thing to see. What is truly remarkable is the extent to which Lynch has worked on the film’s visual appearance, the way in which forms and scenes are presented, and the way in which all of that is integrated with the soundtrack, which is one of the most brilliant and disturbing soundtracks I have ever heard. Normally I am quite happy to see films in small cinemas in the quartier latin, but that film really demands the latest possible audio technology in the largest possible cinema. Again, like in the Fondation Cartier, it is a menacing, low-frequency succession of clanks and rumbles, omnipresent throughout the three hours of the film. There is only one sequence of around fifteen minutes when natural, ambient sound is allowed to intrude in the film’s disturbing and bizzare Universe.

What is it about? Lynch’s own response is the pithy ‘a woman in trouble’. A thread of plot is discernable in the early stages of the film, but it soon disintegrates into a series of parallel histories the link between which is difficult to fathom. But it doesn’t matter; the film is really a succession of films, of scenes. Each may or may not be related to the other. For the most part, we are inside, confined to small rooms, we follow conversations between people whose faces are twisted like those in a canvas from Francis Bacon (one of Lynch’s favourite artists). Menacing rumbling noises can be heard in the background. It is not clear how each room is connected to each other room; crossing a door’s threshold can imply a displacement in either time or space. Part of the film was shot in Poland, and the buildings and spaces in these scenes are imbued with an extra, even heavier, layer of memory and history (and even less paint). To disorient us even further, every so often we are presented with a domestic scene — a suburban family sit in their living room, but they are all wearing rabbit suits. Their slightest movements or most banal utterances elicits raucous laughter from an unseen studio audience. And yes, of course, all of this happens at night.

After all of this, one understands Lynch much better; it is clear that “Inland Empire” was the film he’s been trying to make from the start; it is the film of a visual artist first and a filmmaker second. It is hard to isolate what makes the film so compelling, but I’m certain that it has something to do with this profound visual sense which Lynch has. The film is so rich, so layered, that I could easily see it a second time. Or a third.

But that is enough for today. Not a single cloud can be seen the Parisian sky, so it is probably not a good idea to spend too much time underground with Mr. Lynch.

One thought on “On Mr. David Lynch”