Thanks to a passing mention on my favourite philosophical corner of the internet photographic Universe the measurement on the beam has been moved away from zero (with a light fall, with lumps, at 5:30, as policeman Fox would say). But as these days I’m trying to keep to my promise of publishing at least one photograph per week with a short text does mean that my longer articles are swamped. So here’s small list…

I was happy to read that Film Ferrania have almost resolved their manufacturing problems. Shooting unique special films like their P30 emulsion is one of the best reasons I can think of to shoot film. Here’s my article about P30:

And about that film/digital thing? I think I still agree with most of this.

More longer articles to come before the end of the summer, I hope. There’s Geoff Dyer’s excellent “The pleasure of looking at good photographs” which I mean to say something about… 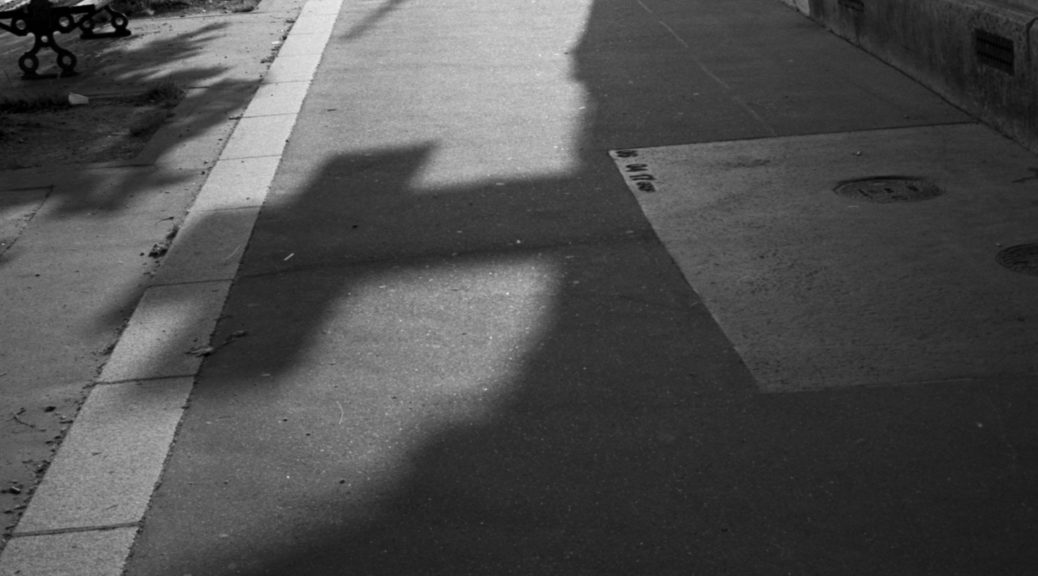 Walking past one of Paris’ most famous landmarks, I noticed this shadow on the street… 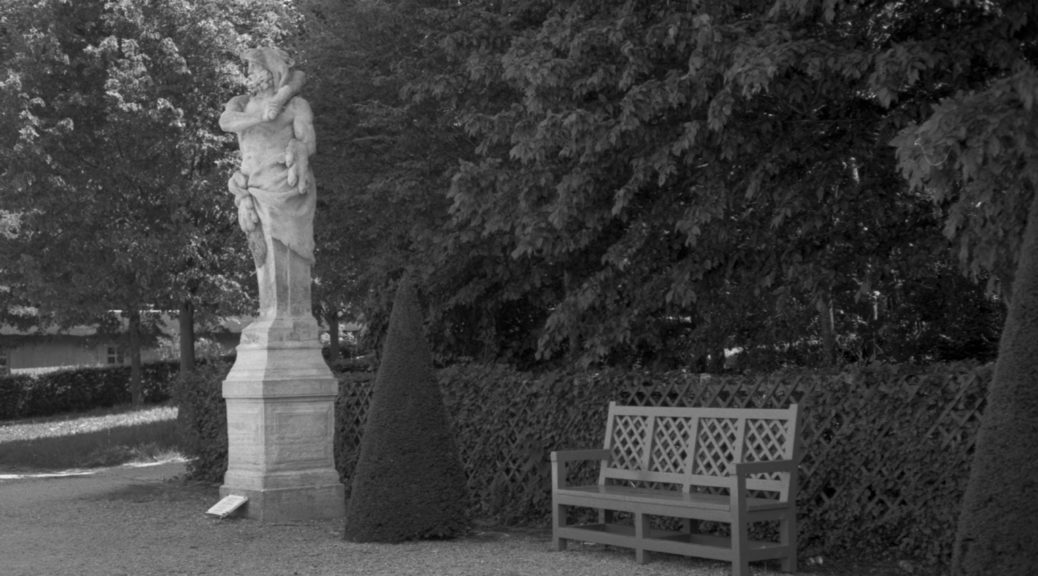 After reading about Eugene Atget’s life I was more than little be interested to visit once again the parks and gardens he photographed in. They are almost all still there and have not changed much. In the last hundred years in Luxembourg gardens they have changed the chairs, but that’s about it.

St. Cloud is an interesting place. It’s easy to get to from here, around half an hour by bus from Porte d’Orleans. There was once a palace there which burned down during the Prussians war at the end of the 19th century. On one side there is the Seine; at the beginning of the 18th century this location was a favoured spot for country houses for rich Parisians. The village of St. Cloud today is quite picturesque. Unfortunately, today it hemmed in on all sides by motorways and elevated flyovers and one is never far from the rumble of traffic. But the park is still intact, and one can still walk rom the town to the park without crossing a motorway. Inside the park, in fact, one can walk for miles, and there are even forest trails, as much as one could hope for in the middle of an enormous city.

The statues that Atget photographed are still there. I brought with me a roll of slow, fine-grained film (still much faster than the film Atget used of course). I took pictures with my Leica. Certainly, there is no way a small portable camera such as a Leica can produce anything like an image from a heavy view camera, but at least there were no pixels involved, and I tried to imagine the photographs I was taking before I took them. There is still a special feeling in this park (I think I prefer it to Sceaux) and I’ll try to return there more often.

Read my two articles about Atget here and here.

After Atget’s death, Berenice Abbot, aided by art dealer Julien Levy, bought the remaining Atget negatives and prints and brought them back to the United States. In those early days, she and the German philosopher Walter Benjamin did much to promote Atget’s work; Abbott herself even printed Atget’s plates for the early exhibitions. Eventually the Levitt-Abott collection was bought by the Museum of Modern Art in New York.

It was not as if Atget’s life work was saved from oblivion by Abbott, contrary what to what one might read in some histories of the time like the patchy and unequal Bystander; thousands of Atget’s photographs were already in collections in Paris. In fact, the Abott-Levy archive only represented about a third of the total volume of Atget’s work. Today on the internet one can find two great bodies of Atget’s prints: those at MOMA, and those in Paris bought directly from Atget during his own lifetime (it’s not a coincidence that in France, where all the prints are stored in public institutions, they are much easier to find and download). However, what’s certain is that Abbott brought his work to the world’s attention. One early critic even wondered if Atget was French or American! The photographs in the Abbot-Levy collection may not be “better” than those which remained in Paris, but they certainly were certainly subjected to more analysis and promotion in the years after his death.

Atget’s photography was close to heart of John Szarkowski, the highly influential director of photography at MOMA. For me Szarkowski was one of the most important figures of photography in the second half of the 20th century. Amongst his many achievements, he returned Andre Kertesz’ photography to public attention and also introduced us to Gary Winogrand, Diane Arbus and Lee Friendlander in the “New Documents” exhibition in the 1950s. Without doubt, Szarkowski was one of the great promoters of Atget. In a key development in Atget scholarship, one of his graduate students, Maria Morris Hambourg, finally succeeded in dating and placing each of his photographs in the correct chronological order.

I had been aware of Atget’s photography for a long while; how could one not be, living in Paris and taking an interest in photography? But reading a post on Leicaphilia and spending time at home to recover from surgery encouraged me to consider his work again. What seems most surprising now looking at his photographs is how far some of them are from the pictorialist models. You see, by the time the end of the 19th century had arrived, it was assumed that photographs should imitate paintings. What a revolution it was to see that they could be something else, something that only photographs could be! It is easy to understand why Szarkowski was so attracted to Atget. Szarkowski saw photography as an art form in itself and not as a lesser department of painting. In one of his final books, drawing on the form he invented in Looking at photographs, he presents 100 of Atget’s photographs, in chronological order, with a short text on each opposing page. The texts are lyrical, poetic, but most importantly informed by Szarkowski’s own vision as a photographer. It’s a wonderful survey of Atget’s life and art.

So why consider Atget’s work today? Cartier-Bresson supposedly commented that Atget’s work was “boring”, while at the same time recognising its artistic value. Towards the end of his life, of course, Cartier-Bresson had decided that photography was inferior to painting, so perhaps it’s easy to understand this. The history of modern photography has been very much written in America, and today Atget is situated in a line leading from himself to Walker Evans and later on to Lee Friedlander and Robert Adams. All of this, of course, was very much aided by the fact that Atget left no indication of what his own intentions were as an artist. His work has inspired many in all kinds of photography; around the internet one can even find an article hopefully entitled “6 Lessons Eugene Atget has taught me about street photography” (note there are only six, not ten).

When I bought my second-hand Leica on the rue Beaumarchais three years ago, I remember the long conversation I had with the shop’s owner. He expressed his disdain of taking pictures of statues. He told me, I just don’t want to take pictures of monuments that a million other people have taken! Today it seems strange that Atget was taking pictures at Sceaux and in Versailles in almost the same year that Andre Kertesz was photographing fleeting moments in the streets of Paris with his tiny portable camera. In fact, one can find the same streets photographed by Atget and Kertesz. The Atget picture, reproduced here, focuses on the broad spread of the Rue des Chantres; Kertesz instead shows people on the street and in the bar. Not surprisingly, Kertesz came by when the bar was still open.

Nevertheless, despite my predilection for such photography, there is a deeper charm in Atget’s photography some aspects of which are against the inclinations of our accelerated times. The American photographer John Gossange remarked that he has had the same Atget photograph on his wall for decades now, and that each time he looks at it, he sees something new. Much more enduring than the persistence of an image in an instagram feed. These are photographs which have a well of meaning which is almost bottomless. They do not rely on tricks of timing and motion for their artistic effect, and have their own depths. Atget took many photographs in Luxembourg gardens, only a short walk from where he lived. I imagined him coming there early in the morning with his view camera and pointing it determinedly in angles skewed away from the graceful lines of park’s paths and hedges.

All this happened on only a few hundred metres from here

Like Atget, I live near Luxembourg. As soon as I was well enough I went to Rue Campagne-Première and looked on the wall of the building at 17b, finding the plaque marked “Eugene Atget” that had always been there but I’d never noticed before. It’s a legendary street in Parisian history. As well as the numerous artists who lived here, in Godard’s Breathless Jean-Paul Belmondo dies after taking one too many bullets a little further down the road. Walking to Luxembourg I was inspired to try to see the statues and the hedges of the park as Atget saw them. In the weeks to come I would return to Sceaux and the beautiful Park St. Cloud. In St. Cloud I even put a roll of slow 50 ISO film; not as slow as Atget’s plates, but slow enough to make beautiful images of parks and statues.

The American critic Gerry Badger recalls a conversation he had with Szarkowski, who asked him if he thought that Atget understood what he was looking at on the plate glass window of his view camera. After hearing Badger’s hesitant response — he said wasn’t sure — Szarkowski responded that of course Atget knew what he was doing. How could he not? View cameras are heavy and cumbersome contraptions. You don’t make a photograph with a thing like that by accident, it requires planning. And Atget’s final photographs were far from what might resemble an official commission. Who would pay him to take a picture of country road at 7AM in the morning? But nevertheless he went, and made the luminous picture I’ve reproduced here. Today, despite all the changes in the hundred years since they were taken, these photographs still very much merit our attention.