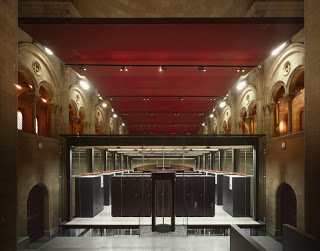 The first post of a new year. The year starts in a troubled enough fashion — unstable weather patterns crossing Europe, high winds blasting across northern France, on Thursday night every train was stopped in Germany. Yesterday morning the temperatures in Paris were the hottest for this time of year since the station in Parc Montsouris opened in 1873. Myself, I walk the streets with my eyes peeled for flying flower pots or loose bits of masonry. Very shortly, were are told, the temperatures will drop to the other end of the dial, fifteen degrees to disappear in the space of a few short days. The Weather, that secure topic of conversation for anyone from a northern shore like me.

But no. We are not here to talk about the weather. My eye was caught by an image a few days ago. It’s the new year! So I will include my very first image into this blog. For an instant, a blast of colour. Stereo sound. After all, I am not sitting in front of the green screen of a VT100 terminal and it is not 1992. Do you see the picture? What do you think it is? I had to think for a minute myself when I first saw it. But then I realised — it is a computer. That vouted ceiling — that is a church. All those strange reverberations which start from those two observations. Reassuingly, the church has been deconsecrated, or at least I think it has. But in any case, not any number of thoughts come into one’s mind seeing this image. This was the only place that the University of Barcelona had to put their computer?

The computer is called “Mare Nostrum”, it is currently Europe’s largest computer. The sea inside contains actually, among other things, entire artificial Universes, like the “Horizon” simulation which some of my colleagues here in Paris are involved in. A zillon particles of gas and dark matter are evolved through a few billon years of cosmic history, structures form and stars light up, galaxies condense from gas. It’s amazing how far these symbolic representations of reality can take us these days you know…