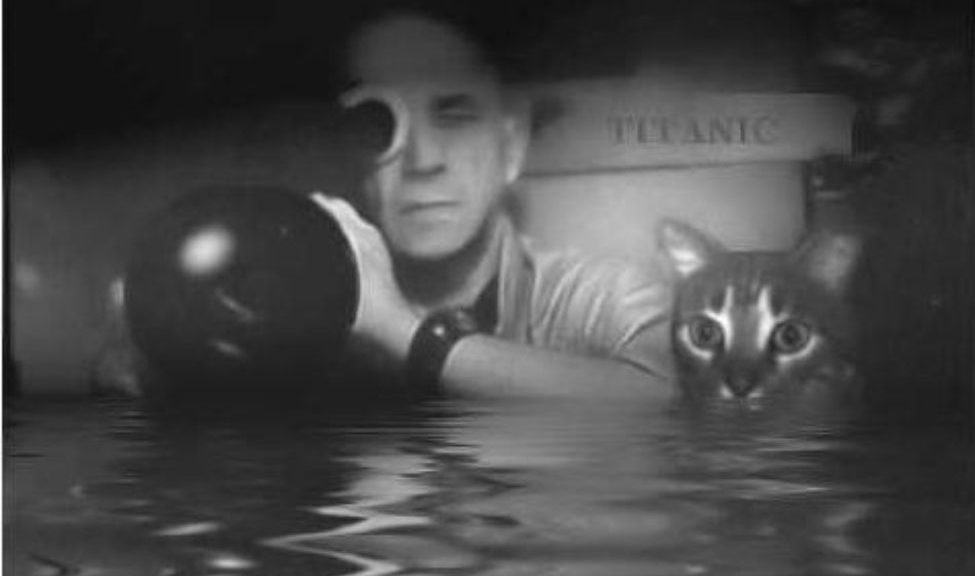 Ceci est l’histoire d’un homme marqué par une image d’enfance. And so begins Chris Markers’ La Jetée, a story of memory, time, the past and the future. This is a story of man, marked by a childhood image. That could be, perhaps, Marker’s own story. At the new exhibition at La Cinémathèque française , one has the opportunity to discover all of Markers’ works, and not just his films, but also his writing, his activism — and his drawings of cats.

Marker was a singular figure in the history of French cinema, and one not easy to classify. After early experiences of being misinterpreted by journalists, he became reluctant be interviewed or profiled. He was not, however, a recluse: one may be reminded of Thomas Pynchon, who said: “’recluse’ is a code word generated by journalists … meaning, ‘doesn’t like to talk to reporters”. On his library card, he substituted he picture with that of his cat, Guillaume-en-Égypte, who would serve as his public representative.

His interests were vast. He was at least novelist, director, publisher and photographer. Marker died in 2012, and the Cinémathèque were able to acquire the contents of his studio (all 500 boxes of it!). This show is a result of the last few years’ worth of cataloguing and sorting.

His most famous film in English-speaking countries is La Jetée, a remarkable short film composed almost entirely of static black-and-white images. It tells the story of a man in a post-apocalyptic Paris who is forced to voyage to the past and future and who discovers the true significance of a traumatic event remembered from his own childhood. But at the same time Marker was assembling the striking still images for La Jetée on the floor of his Parisian apartment, with Pierre Lhomme he was filming Le Joli Mai, a revolutionary documentary showing life in Paris in May 1962. Like Werner Herzog he had an amazing ability to get people to speak openly towards the camera. In the film, a young Algerian man tells of the casual racism he suffered at work; a stockbroker complains on how the Algerian war will affect his stock prices.

Today the details of Marker’s are reasonably well-known, but in the past he certainly liked to tell every person he met different and conflicting stories concerning his origins, and at times he had formative childhoods in both Cuba and Inner Mongolia. In reality, he was born in one of the more bourgeois Parisian suburbs and soon changed his name to “Chris Marker” because he’d already decided he wanted to travel. A name like Chris Marker, he reasoned, would be easier to pronounce in many different languages. Travel did indeed play an important part of his life: and in the 50s he edited a series of well-regarded travel books for Seuil. William Klein, who met Marker at this time, remarked that he was “the kind of person you’d expect to have a laser pistol tucked into his belt”.

Technically, Marker was always worked at the forefront of what was possible with the technology available at the time. Le Joli mai was one of the first documentary films for which the sound was recorded with the images, removing the need for a separate sound recording machine. At the one can discover many items from Marker’s vast collection of imaging-recording devices. He was always fascinated by the possibilities that new technologies created for recording and experiencing the word around us. The entrance to the exhibition itself is modelled around the virtual gallery he created inside Second Life.

In an interview on france culture Costa-Gavras (director of the Cinémathèque) explains that Marker understood immediately the potential of digital technology. Already during industrial disputes in the east of France in the 1960s, Marker and and a group of like-minded film-makers showed striking workers how to make films and how to use cameras and recording equipment to their advantage. The collage reproduced here from the exhibition catalogue seems remarkably prescient for our “citizen reporter” times.

Marker was deeply interested in understanding what the consequences were of the revolutionary fervour which spread around the world in the 1960s. This story is chronicled in his epic documentary film, “Le fond de l’air est rouge” which is amusingly translated into English as a “A grin without a cat”. The end results of these revolutionary upheavals? Not a lot. As Marker notes pessimistically in the DVD liner notes, for French intellectuals the bottom of the air would always be red but despite this, red would always be at the bottom.

Like many of his generation he saw cities in ruins and expected the next war to come soon enough; his first film was made in the rubble of Berlin. The images of “Paris in Ruins” of La Jetée are in fact other European cities destroyed by wartime bombing. At the cinematheque exhibition, many of Markers’ films are shown on continuous loops in separate rooms without sound isolation. In La Jetée, the beautiful choirs of a Parisian Russian orthodox church are heard at the moment of the destruction of the city. These heavenly sounds resonate throughout the whole exhibition at regular half-hourly intervals, conditioned by the length of the film. Ceci est l’histoire d’un homme marqué par une image d’enfance? Perhaps.

For those not familiar with Marker, chrismarker.org is wonderful source of information about the man and his work, in both French and English. Thanks also to Mr. J. Seagull for the loan of the exhibition catalogue.

2 thoughts on “Chris Marker at the Cinémathèque française”