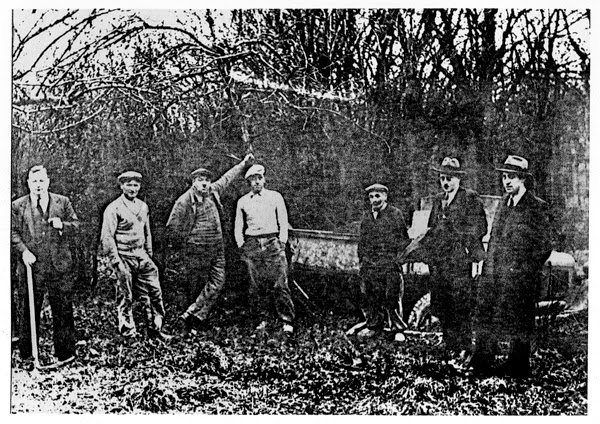 A grainy black-and-white photograph. A line of men stare into the camera. In the background, bare trees are outlined against the cold winter sky. The ground is thick with dead winter leaves. Four of the men are in suits and hats; three are labourers. One heavy-set man with a pencil moustache leans nonchalantly against a tree, another is there with his hands in his pockets. Behind them, a small truck is parked at an awkward angle. On the far left, one of the well-dressed men holds a pick in his hand. This man is Henri Mineur, who would in the following year become the first director of the IAP. The date is the 6 of January 1938: the date on which construction of the IAP started. Last Friday, we celebrated the institute’s 75th anniversary with a series of talks and presentations, and in addition a short film made by my friend Mr. Jean Mouette.

The IAP was created out of an urgent need for new structures to carry out scientific research. In the early part of the 20th century, astronomy was undergoing a radical transformation. With the arrival of new instrumentation and new telescopes it became possible for the first time to apply our knowledge of physics to understand astrophysical processes and observation: the science of “astrophysics” came into being. For centuries, astronomy had been concerned with the positions and movements of stars and other objects, but with the arrival of richly quantitative measurements such as spectroscopy, which can provide detailed information concerning the chemical make-up of very distant objects, it became clear that a new approach was possible. However, it was not clear where this kind of new astronomy could be done in France – certainly not at the Universities which were orientated uniquely towards teaching, and saw no place for research. The observatories, steeped in centuries of positional astronomy (and still labouring to accomplish immense tasks like the “Carte Du Ciel”) were not quite ready for the transition.

One man, Jean Perrin, saw the need for a new national institution to carry out astrophysical research – an institution which would not be part of any existing structures but would be independent. A left-leaning government had just arrived in Paris, le “Front populaire”, and they fully supported Perrin’s idea. Jean Zay, a minister at the time, signed a decree on the 30th of October 1936 which led to the creation of the Observatoire de Haute Provence (the OHP, in some ways the “observing station” of the IAP), and the IAP itself, initally designated as a centre of research which would analyse data arriving from OHP and devise new instruments for the telescopes. The IAP would be constructed on a patch of ground in the Jardin de L’Observatoire, which the government had requisitioned for this purpose (leading to tensions between the Observatoire and the IAP which persisted for decades). The front populaire was uniquely disposed to these ideas. In fact, Perrin’s visits to the minister Jean Zay’s office invariably resulted in him receiving all the funds he requested.

Construction of the IAP started soon afterwards, and the building’s skeleton was in place by 1940: the interior, however was unfinished, and with the arrival of the Vichy regime and the German occupation, the construction was halted. Nevertheless, as Daniel Chalonge tells us after the war, building work was carried on in secret. Certainly other concerns occupied the scientists. Some left, others remained. Neither Perrin or Zey would survive the war: Perrin left for New York, where he died in 1942. Jean Zey was arrested by the Vichy government and later assassinated. In Paris, two astronomers, Holweck and Solomon, were arrested and executed by the Nazis. Henri Mineur himself was briefly imprisoned, before being released: he spent the remainder of the war in the resistance. Even astronomers long-dead suffered: the statue of Arago on the place Ile-de-Seine, in front of the site of the observatory, was melted down for bullets and shells. But finally, in 1944, some staff moved to the IAP. The building would not be completed until 1952 (and in the 1980s a third floor would be added to create the building as we know it today).

From almost the beginning, both theoretical and observational subjects were investigated at the IAP: spectrophotometric observations of the sun, stellar atmospheres, and every aspect of physical processes in an astrophysical context. We heard how Evry Schatzmann, aided by a large number of students, investigated almost every kind of astrophysical phenomena, and contributed greatly to the international reputation of our institute (but it made life difficult for the students: as they were all working on different topics, none could help each other). At the same time, machine shops and mirror polishing facilities, together with facilities for numerical calculations has ensured that new observations from OHP and elsewhere could be fully exploited. Today at IAP there are no longer any machine shops, but the importance of computing in astrophysics at the IAP has only grown in the intervening years.