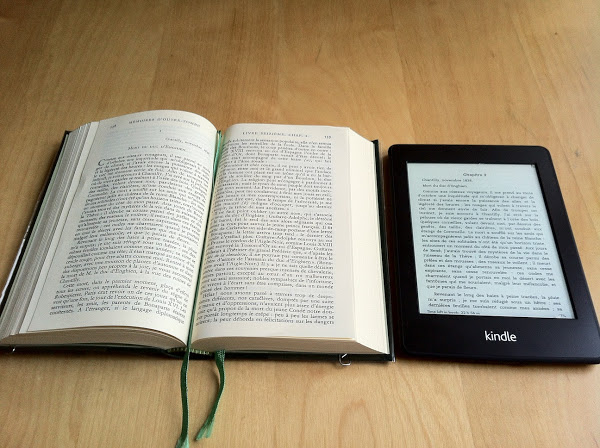 Somewhere around one third of the way through Victor Hugo’s “Notre dame de paris” the story’s villan is in his attic erie and points at a thick, printed book on his table. Behind it, one can see through the grimy windows of his cell the faint shadows of the towers of Notre Dame outlined against the darkening evening sky. He says “Ceci tuera cela” — this will kill that. And then Hugo launches into a very long (and for my money, unconvincing) digression about how the printed books have ended the realisation of great works of architecture. What he was thinking about was how construction of the cathedrals in Europe (and mostly in France) stopped at around the time of the invention of printing press. But that, I think had a lot more to do with other factors. No cathedrals were ever built in the high middle ages in Italy, for example, because the monks were simply not as well organised as in France. But that’s a digression. 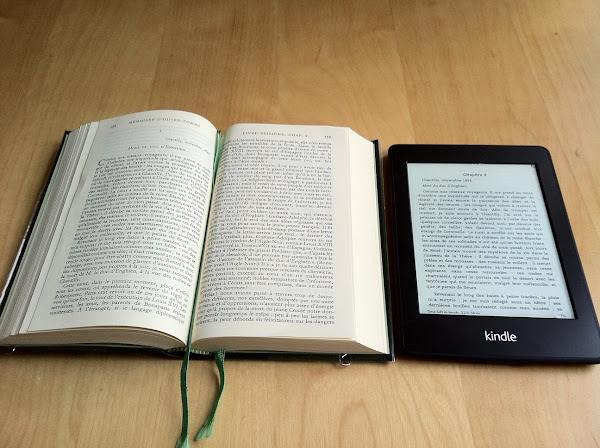 I see a picture now of a electronic book (we have such miracles now, in the early 21st century) next to and old, bound paper book. Ceci tuera cela. Like the picture above, where you can see an image of my copy of the first volume of Chateaubriand’s Memoires d’outre tombe in the La Pléiade edition. “La Pléiade” is the Apple, Inc., of book edition — each volume is hand-bound in leather and made to exacting standards. Each book contains around 1000 pages of text printed on what we call here “bible paper” — which is very thin indeed. Chateaubriand’s monumental work, which must be at least ten volumes in books of any normal paper and size, is reduced down to only two volumes. On the website you can even find a video explaining how each book is made to their exacting quality standards (missing only a shaven-headed soft-spoken English guy telling us how many different cows they tried to find the right leather). Each text which appears in “La Pléiade” strives to be the definitive edition; it one of the highest accolades a writer can hope for is to be published in “La Pléiade”. Almost all of the writers in La Pléiade are dead; their reputations confirmed. And next to that, my kindle Paperwhite, which can store probably more than one thousand books although who would want to as it is wirelessly connected to what we used to call “the internet” but we now call “the cloud” where, the last time I looked, there was about one and half million books ready for instantaneous download from anywhere in the world. Some for a fee, some not. Amongst them, the complete works of Francois Rene de Chateaubriand, which can be had for a euro or two. The Kindle Paperwhite itself, in its most inexpensive incarnation, costs about as much as two volumes of “La Pléiade”. Amazon, I understand, is regarded by some investors as a charity as it makes almost no profit from its hardware: it hopes that people buy books from their stores. But there are countless books out there with lapsed copyrights that can be downloaded instantly. Ceci tuera cela?

I admit I’m not sure. In terms of convenience, the Kindle is unbeatable. I like to read big thick books, and even the biggest, thickest book I have can be taken anywhere without incurring a heavy weight penalty. The text is legible: the screen is illuminated and can be read under any lighting conditions. But it doesn’t have the nervous lighting of an iPhone or iPad — it is simply white light LEDs that shine down on the e-ink display through a diffuser. In fact the thing that I appreciate most about it is that it makes it as easy to read a book, a real book as to ready all of the other electronic babble that we are surrounded by today. But… there is nothing there. There is no physical object. There is no proof that one has actually read the book, there is no crinkled spines or pages slightly worn where hands have passed. There is just a file somewhere in flash memory representing the physical object. The French call this process Dématérialisation which sounds wonderful to Irish ears — one imagines the physical object disappearing. And once that the physical object disappears, all sorts of bad things can happen. There was the celebrated example a year or two ago where Amazon remotely deleted users’ books, after discovering that they had no right to sell them in the first place (and, completely unintentionally I’m sure, that book they remotely deleted was Orwell’s 1984). Ray Bradbury never liked electronic books, complaining that they smelt like burning fuel.

Today, we are often offered something of great convenience and value — in this case an instant access to an almost limitless collection of books — and we have to hope that the corporation behind it all has our best interests at heart. Of course they do, right? They know what you read, how fast you read, where you read it. Where could be the harm in that?

Most modern printed books are not made to the exacting standards of La Pléiade. Cheap paper glued into a paperback cover: in a decade or so those pages will have yellowed and fallen out. What’s the point of accumulating books like that? But no power source is needed, and neither is anyone’s permission required read your own books. Ceci tuera cela? Maybe.

One thought on “"Ceci tuera cela" — on books”